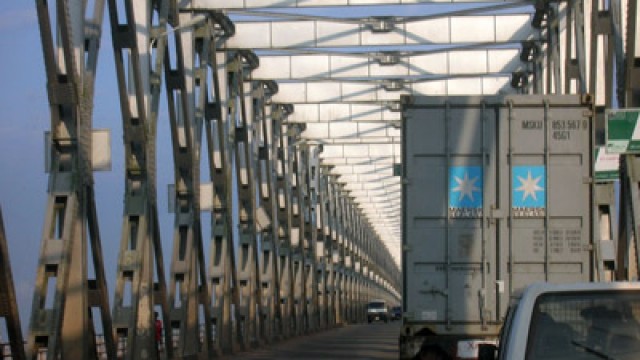 The Federal Government has awarded a N14.4billion contract for additional early works on the Second Niger Bridge linking Delta and Anambra states in the South-South and South- East zones.

The project is being handled by Messrs Julius Berger (Nig.) Ltd under a Public Private Partnership (PPP) arrangement at the cost of N130 billion. The additional N14,4 billion is to be used for artworks and payment of compensation among others.

In a statement yesterday in Abuja, the Assistant Director (Information), Federal Ministry of Power, Works and Housing, Mohammed Abdullahi noted that the existing Niger Bridge which was commissioned on January 4, 1966 is severely overstressed, adding that its continued serviceability cannot be assured.
He stated that the idea of a Second Niger Bridge started way back in the late 1970s, but its realization had been delayed by several challenges. According to him, the administration of President Muhammadu Buhari is resolutely committed to the completion of the important project.

Abdullahi said the Federal Government had also awarded a contract for emergency repairs of Tamburawa Bridge along Kano- Kaduna Dual Carriageway in Kano State to Messrs Borini Prono & Co. (Nig.) Ltd at the cost of N1.9 billion, with a 12-month completion period.

The scope of work in the emergency repairs involves the use of rock-filled gabion protection with reno mattresses, fitters and embankment protection to the abutments. This intervention is premised on public outcry and concern earlier expressed by the governor of Kano State over the scouring around the piles and exposure of substructures of the said bridge and subsequent integrity test carried out by engineers from the ministry

REPORTER: UCHE NDEKE Commercial banks in Awka, the Anambra State capital, have continued to witness high patronage by customers who...

REPORTER: AMECHI ODO Bank Customers have expressed frustration over their inability to withdraw money from the Automated Teller Machines ATMs)...

REPORTER: UCHE NDEKE The Central Bank of Nigeria (CBN) says it is monitoring the activities of commercial banks and will...

REPORTER: UCHE NDEKE Residents of Awka, the Anambra State capital are still worried about the inability of commercial banks to...